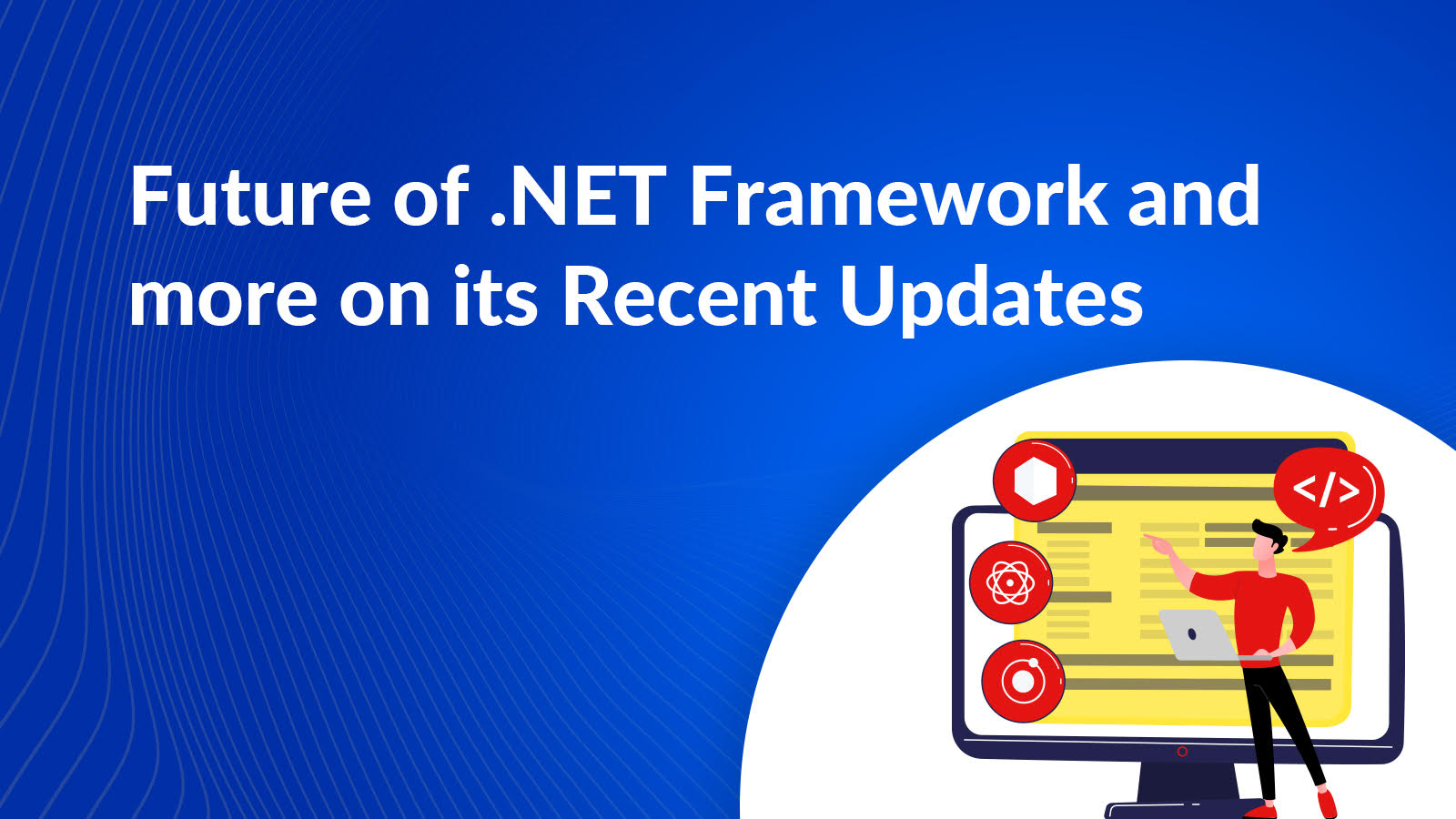 Future of .NET Framework and More on its Recent Updates

How does the .NET framework fare in the future? Is the framework suitable for developing software in 2022 and beyond? Does it meet the ever-growing performance demands, and how long will it remain relevant? So, what exactly is the future of .Net? We need to examine Microsoft’s current .NET development ecosystem, its future plans, and […]

Web Development
Future of .NET Framework and More on its Recent Updates

How does the .NET framework fare in the future? Is the framework suitable for developing software in 2022 and beyond? Does it meet the ever-growing performance demands, and how long will it remain relevant? So, what exactly is the future of .Net?

We need to examine Microsoft’s current .NET development ecosystem, its future plans, and the potential of the framework in order to find all the answers we need.

The relevance of any development platform depends on how interested its creators are in it. Let’s take a look at Microsoft’s plans for the future of the .NET framework.

Microsoft introduced .NET 5 a year ago. The open-source framework has been reworked to become a cross-platform development powerhouse. It was an important move by the company, but it didn’t end there.

A new version of the .NET framework will be released every November, Microsoft promised. It represents a considerable investment and commitment for the tech giant, given the size and capabilities of .NET. In other words:

With Microsoft’s commitment to keeping track of the most pressing demands of the development community, the platform will remain current.

Despite any curveballs this future may throw, Microsoft believes that .NET is the future of software development.

Are their ambitions reflected in reality?

Know the cost of developing a .NET Application, in our article here.

.NET Framework: The Present and the Future

.NET’s future is being shaped right now: with every update of the framework, the responses of the development community, and the perception of the platform, it will further grow and develop.

How does the .NET Framework present itself today?

According to a 2021 StackOverflow survey of 80,000 developers, .NET 5 and its predecessor .NET Core were rated the favorite development platforms by 72% of respondents.

.NET Framework is rated as the most popular framework by 37% of professional developers.  .NET 5 is not as popular as .NET 4.

Whatever perspective you take, the numbers are impressive for two reasons:

Developers are extremely nitpicky about the tools they use; .NET 5 is a brand new platform that is widely used today.

.NET Framework results in the following:

In addition, thousands of companies use the .NET framework since it was first released. That’s why it was no surprise when .NET 5 debuted. By extending .NET’s capabilities to open-source, cross-platform capabilities along with several new features, it was a natural evolution of the framework.

.NET 5 was already an excellent foundation for future development, as you can see.

A lot of new features have been added to .NET 6 recently, such as:

What’s the Future of the .NET Framework?

To begin with, .NET 5 was the first major step towards the framework’s unification, and it created a single ecosystem of development tools that could handle desktop, web, cloud, mobile, gaming, IoT, and artificial intelligence.

An overarching system that unifies different development tools is a good idea. A single point of access to a vast array of different programming tools simplifies, accelerates, and secures the development process. Clients also benefit from reduced development costs.

As a consequence, it is likely that this unification will continue to strengthen with each passing year.

Let’s also explore Themes of .NET, which provides a collection of the most urgent and discussed topics and issues within the .NET development community.

Taking this into consideration, we can anticipate future .NET evolution vectors, such as:

Know about the diff between .Net Framework vs .NET Core vs .Net 5, in our detailed article.

Database access endpoints are typically created using the .NET Core API. Scalability and security are ensured by using this method. .NET Core is used at the backend and React.Js, Angular, and Vue.js at the front end.

Microsoft releases one version every year since then, and it will continue to do so. Each version is supported, maintained, and improved. Minor versions will be provided according to needs, support, and security issues, even though they are not included in the visual roadmap.

.NET Core Roadmap: The word “core” is no longer in the product name after 2020. .NET Framework compatibility is included in version 5.0. By renaming .NET Core as .NET Framework, any differences between the two will be eliminated.

.NET is a Unified Platform

Released in 2020 with version 5.0, the Unified .NET platform allows developers to reuse code in line with .NET standards.

Many of the .NET Core’s features are supported by the .NET Standard, making it suitable for web, desktop, and mobile projects. It enables the reuse of business logic and reduces coding time.

Why Prefer Net Core Over Other Framework?

Why should developers use NET Core when other frameworks provide similar functionality?

Visual Studio for Windows, MAC, and Azure are among the Microsoft tools designed and optimized for .NET Core. As well as deploying and creating applications, Microsoft cloud services include many tools. The tools increase the speed of writing code and allow it to be debugged. Microsoft Azure is also compatible with a variety of programming languages and Frameworks. The only framework that supports all features of Azure is NET Core.

Here are three .NET projects that are currently popular:

Is it worth developing software on .NET in 2022 and beyond?

Yes. That’s the short answer. A framework such as this can be used to deliver reliable, secure software to enterprises as well as small businesses. With the current development of the framework, we see a stable and bright future for .NET.

Additionally, what are your thoughts on what software development tools of the future will look like?

This vision that Microsoft is selling us with .NET 6 and beyond is aligned with our vision for a solid, convenient, and cost-efficient framework that can handle everything from web development to AI and IoT.

We’re eager to take advantage of what the .NET ecosystem has to offer as we build software for our clients, and we’ll watch its evolution with great interest.

Are you working on a project? Let’s talk about it.