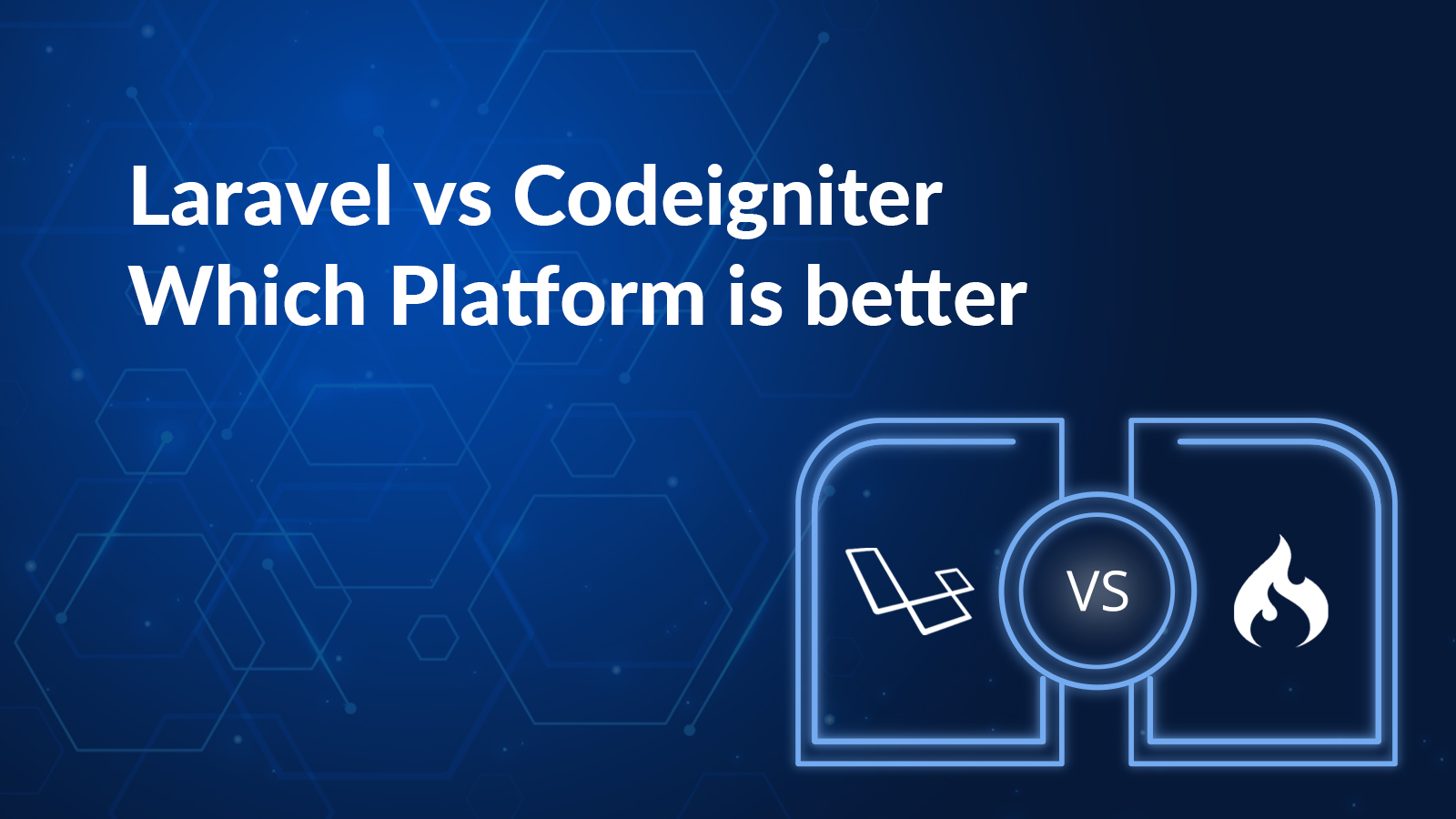 Laravel vs Codelgniter : Which Platform is better ?

For building custom solutions, PHP is a very popular choice among backend developers. Statistics show that PHP is very popular among backend developers.  Speeding up the web development process is possible by using PHP frameworks. PHP frameworks are abundant on the Internet today, among which are two of the most popular ones, Laravel and CodeIgniter. […]

Technology
Laravel vs Codelgniter : Which Platform is better ?

For building custom solutions, PHP is a very popular choice among backend developers. Statistics show that PHP is very popular among backend developers.  Speeding up the web development process is possible by using PHP frameworks. PHP frameworks are abundant on the Internet today, among which are two of the most popular ones, Laravel and CodeIgniter. Let us compare Laravel vs CodeIgniter to know which platform is best suited under which circumstance.

We will compare CodeIgniter and Laravel in this blog to determine which framework is the best. Taking a closer look at the Laravel and CodeIgniter frameworks, we can see how they differ in concept and functionality. Firstly, let’s explore briefly some of the features of each framework.

What is the Laravel Framework?

It was created by Taylor Otwell for the development of full-featured web applications. The framework is inspired by another popular PHP-based framework, Symfony, and follows the model-view-controller (MVC) architecture.

Source code can be found on GitHub and is licensed under the MIT License. Because it follows accurate and expressive language guidelines, it is a trustworthy PHP framework.

A great deal of development time is saved by rationalizing web development tasks like routing, authentication, caching, and sessions with Laravel development.

Among Laravel’s features are its innovative approach to retrieving relational databases, a devoted dependency manager, practicalities that make application maintenance and deployment easier, and its focus on syntactic sugar.

What is the CodeIgniter Framework?

The PHP-based CodeIgniter framework is an influential minimalist web framework. This toolkit is designed for developers who are looking for a simple and elegant framework that would help them develop web applications.

For generating dynamic websites utilizing PHP, this PHP framework is one of the best available on the market.

With CodeIgniter, you do not have to depend on MVC development patterns to build your application. Its greatest feature is that it enables plugins from third-parties to apply complex functionalities.  Thus, let us find out more about Laravel vs Codelgniter.

Furthermore, another admirable feature of CodeIgniter is that it has excellent security and encryption procedures.

The following image is through https://trends.builtwith.com/framework/PHP.

The following statistics provide market usage statistics for Laravel and CodeIgniter based on several studies. These will give a clear picture about Laravel vs Codelgniter.

Presently, Laravel has a market share of around 0.37% of every existing web framework on the market.

• Laravel currently has 66.5k stars on Github and 21.5k live projects. The real-time framework has been optimized by around 544 contributors.

Among all the existing web frameworks, CodeIgniter holds a market share of 0.36%.

CodeIgniter has 18.2k stars on Github, along with 7.8k forks.

Almost 1,410,088 websites use CodeIgniter today, including ones from India, Indonesia, Japan, and Vietnam.

Google Trends shows in the Laravel vs Codelgniter that Laravel leads CodeIgniter in all aspects for the past five years and even longer.

Laravel and CodeIgniter are two distinct frameworks that are intended for different purposes. Laravel allows the web developer to take advantage of articulate object-relational mapping ORM, whereas CodeIgniter lacks this capability. Similarly, Laravel includes modularity in its design, while CodeIgniter demands modules and modular extensions.

Laravel, on the other hand, is a complete full-stack application framework, while CodeIgniter works as a minimalist microframework.

There are many extra features in Laravel that may not be easy to learn at the beginning.

CodeIgniter is far simpler and easier to learn than Laravel.

As a result of its communicative coding pattern, Laravel is highly popular at the moment. Laravel has a higher popularity curve than CodeIgniter because it is favored by almost every experienced developer.

CodeIgniter 2.x is easy to use. This has led to CodeIgniter’s popularity among web developers.

Model View Controller (MVC) is the typical filing pattern for Laravel. The ‘Artisan’ command-line tool is available there.

MVC is the architectural pattern of CodeIgniter. It eases the onboarding process. Object-oriented programming was used to create the pattern. The pattern was then customized to suit the developer’s needs.

Modularity is built into Laravel from the ground up. Developers can use this feature to break a given project into tiny modules via the bundle.

As a result, CodeIgniter does not provide any built-in modularity. Modular Extension is required to create and store modules.

Template engines are not included in CodeIgniter. This tool must be integrated with Smarty, a third-party template engine. In addition to improving the performance of the CodeIgniter website, this allows them to perform all common tasks.

By using PHP Unit, Laravel developers are able to explore the application code without being interrupted.

HTTP is not entirely supported by CodeIgniter. CodeIgniter developers can generate paths to manage the data transmission securely by using URLs.

CodeIgniter does not clarify the streamlined development of the REST APIs.

Laravel vs CodeIgniter: What is The Difference?

There are two frameworks, Laravel and CodeIgniter, designed for different purposes. In contrast to CodeIgniter, Laravel offers an object-relational mapping ORM that is eloquent in its approach.  Furthermore, CodeIgniter requires its users to construct and maintain modules using modular extensions, whereas Laravel features a built-in modularity.

Laravel vs Codelgniter also differ in the fact that CodeIgniter is a minimalistic microframework, whereas Laravel is a full-stack framework. In addition, CodeIgniter and Laravel have the following differences:

Which Web Framework to Use: Laravel vs Codelgniter

The above table provides a detailed comparison of two popular PHP frameworks – CodeIgniter and Laravel. Their popularity cannot be overstated. Both CodeIgniter and Laravel are exceptional PHP frameworks that are well suited for different purposes. You can choose one of these frameworks based on your business needs and type of web project. Thus, the following points between Laravel vs Codelgniter, will help us find out which one to use and when.

When – CodeIgniter is recommended

Laravel is a better option for you if –

The comparison of Laravel vs CodeIgniter in this blog is expressed in an elaborative manner so that both the users and the tech stakeholders can make an informed decision.

For developing web applications, both Laravel and CodeIgniter are excellent PHP frameworks. In comparison to CodeIgniter, learning Laravel may prove to be a bit challenging for beginners, but once you master it, it offers you a number of advanced features that make your website more effective.

CodeIgniter is a robust PHP framework that is easy to learn and is suitable for projects that are trivial or don’t require any additional authentication features.

From the above Laravel vs CodeIgniter comparison, you may easily see that CodeIgniter lacks precise features for database schema migration, whereas Laravel makes it easier with its database agnostic migrations.

Depending on the requirements of your business project, our experienced team at TechnoBrains can help you build web applications in Laravel or CodeIgniter.