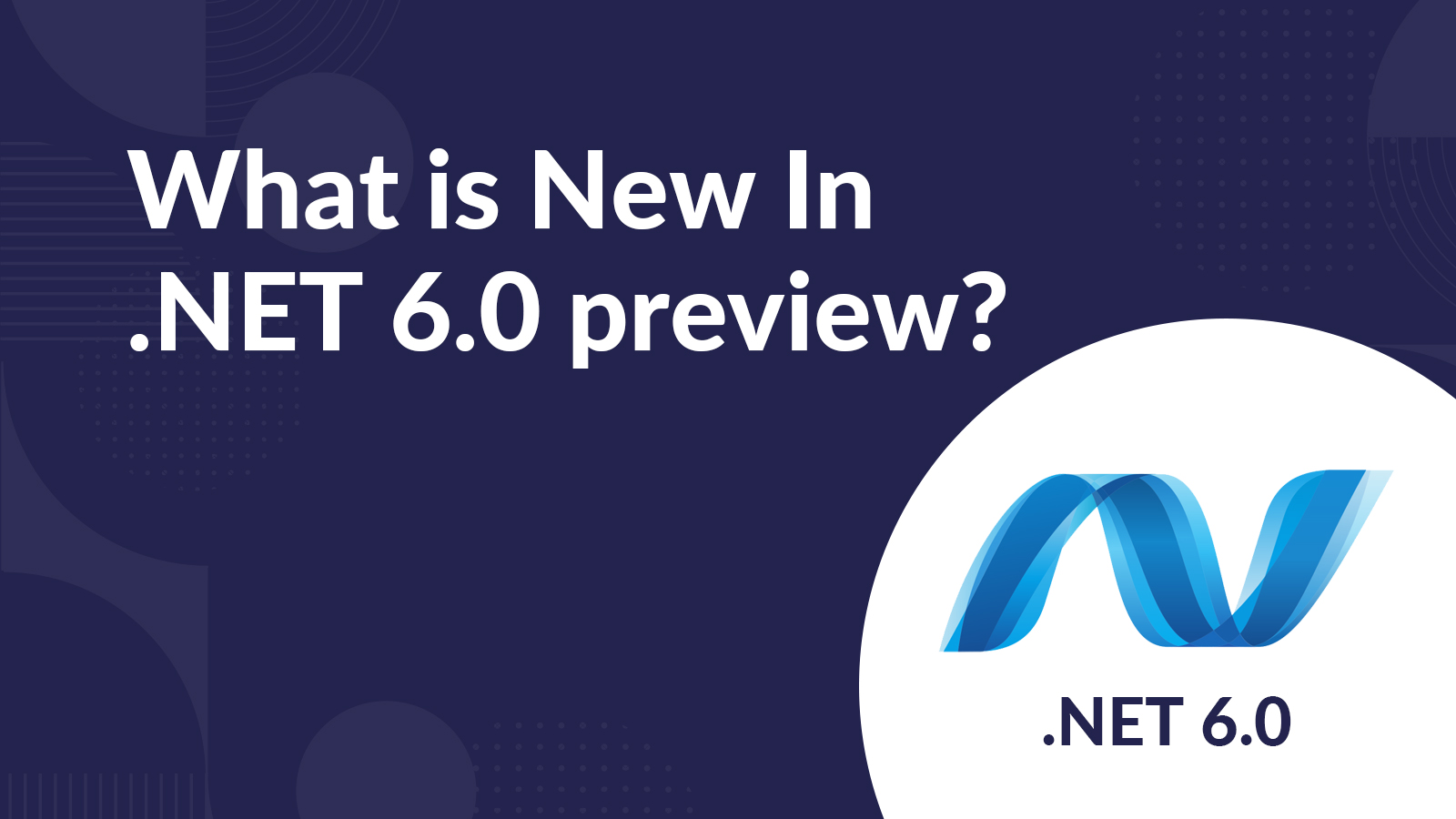 Microsoft .Net 6 – Things You Should Know

With the release of .NET Core 1, Microsoft went open-source with the .NET framework. A simplified version of the class libraries is what Miguel de Icaza described as a “redesigned version of .NET Core.” .NET Core’s cross-platform versatility makes it the “foundation of all future .NET platforms,” according to Microsoft’s .NET project manager, Immo Landwerth. […]

With the release of .NET Core 1, Microsoft went open-source with the .NET framework. A simplified version of the class libraries is what Miguel de Icaza described as a “redesigned version of .NET Core.” .NET Core’s cross-platform versatility makes it the “foundation of all future .NET platforms,” according to Microsoft’s .NET project manager, Immo Landwerth.

.NET Core 5.0 was the next major release. The update came after .NET Core 3.0. .NET 5.0 was chosen over .NET Core 4.0 for two reasons. There was no confusion with the 4.x version of the .NET Framework. It was also meant to emphasize that .NET was being immediately implemented. Thus, “Core” was removed.

Read here in detail, if you should consider migrating to .Net5, in our detailed blog.

With .NET 5.0, the .NET Framework as well as .NET Core are more widely supported. The resulting version has vast improvements over the previous version.

The .NET 5 project may be Microsoft’s last step in remaking .NET open-source and cross-platform. Still, .NET 5 represents Microsoft’s first move toward a new release pattern. The next version of .NET will be released by Microsoft in November each year in the near future.

We can already see many improvements and features in .NET 5 with the .NET 6 preview already in place. .NET 6 targets features in Xamarin that were not present in .NET 5. Thus, native mobile and desktop development become more compatible. Thus, the different toolkits for the Windows user interface will be better integrated. As well as these major improvements, .NET 6 contains many smaller-scale enhancements. .NET’s official roadmap is laid out by Microsoft in detail.

Things You Should Know About .NET 6

Microsoft’s Themes of .NET offers more information on the plans, changes, and challenges associated with the current .NET 6 development.

.NET 6 will bring a lot of new features and changes. This article examines some of the plug-ins that will be well suited to these changes.

Cross-platform mobile and desktop applications can be developed with Xamarin Forms by using a single codebase for iOS, Android, and Windows. In 2016, Microsoft acquired Mono Engineering, the company that developed it.

Cross-platform development is easier with it than WinUI. A mix of native iOS and Android controls and XAML support support their cross-platform strategy.

The company also has Xamarin.Forms which is cross-platform. Platform for generating Model-View-ViewModel (MVVM) applications, Xamarin.Forms. A single, highly extensible API allows you to build applications using built-in pages, layouts, and controls. Our app can feature pixel-perfect controls, layouts, pages, and cells due to its ability to subclass.

This modern UI toolkit is built upon Xamarin.NET Multi-platform App UI is used in .NET 6. NET 6 unification has added new features and improvements. By using one project and one codebase, we can produce applications that can be deployed across multiple devices with minimal overhead.

Multi-platform apps are able to provide a consistent experience across a variety of platforms and devices thanks to the .NET Multi-platform App UI. It is possible to create mobile and desktop apps that target Android, iOS, macOS, and Windows with a single codebase.

With .NET 6, you can integrate and extend the Xamarin.Forms toolkit to support mobile and cross-platform development. As well as extending Xamarin.Essentials, the controls can be used across platforms. We can take advantage of many device capabilities with MAUI. Among these are sensor data, photos, contact information, authentication, and secure storage.

Since .NET 6 includes installation instructions and sample projects, it is easy to build applications. XAML is also supported as well as a hot reload feature in C#. Furthermore, platform-specific assets can be managed in one place.

Read in detail about .Net Framework vs .NET Core vs .Net 5, to understand clearly about .Net 6.

A resolution-independent UI framework is Windows Presentation Foundation (WPF). With modern graphics hardware, it uses a vector-based rendering engine. This application development package presents an extensive set of features including Extensible Application Markup Language (XAML), data bind, 2D and 3D graphics, animation, templates, documents, media, and typography. .NET is part of WPF, so we can easily integrate it with other .NET components.

The performance improvements of Arm64 over .NET 5 continue to drive .NET 6 development. .NET 6 is focused on enabling seamless performance, which is in contrast to .NET 5. In contrast to Windows on Arm devices, the Windows on Arm framework (WFP) is supported out of the box in .NET 5 rather than through x64 emulation.

Apple Silicon support in .NET 6 is a key feature on Macs. Since Apple provided Developer Transition Kits (DTKs) to the .NET development team in 2020, the team has worked to enable support for the Apple Silicon chip.

.NET 6 preview 1 enabled Apple Silicon for the first time. However, at this stage, these builds can still be considered alpha-quality, as advised by Microsoft. A high-quality product requires significant validation and several design issues to be resolved.

By using Blazor, .NET web applications can be built quickly and easily. Since it integrates seamlessly with libraries like ComponentOne, it is an excellent choice for UI applications. Increasing efficiency is the result of this.

The first Blazor server had .NET support. WebAssembly was used then. Now, Blazor desktop applications can be developed using .NET 6. You can create hybrid clients using Blazor desktop, combining web and native UI in a native application. It is intended for web developers who want to provide rich offline and client experiences for our users. ComponentOne, for example, can also enhance these experiences.

There is a programming model called Blazor. Adaptable, it can be implemented in a number of ways. Similar to Electron, Blazor works on desktops. An embedded Blazor server will render content through a WebView control. This is capable of serving Blazor content as well as other web-based content, such as JavaScript, CSS, and so on.

In the default configuration, Blazor desktop doesn’t use Blazor Web Assembly. It is not clear what the benefit of WebAssembly is for desktop applications. Blazor WebAssembly performance has also improved with .NET 6.

There are many options available to structure our applications in .NET 6’s Blazor desktop. There is no need to make use of Blazor or other web technologies for the outermost native application container (such as the title bar). Our Blazor-based website, which we have implemented already, uses Blazor desktop for user profile pages and other features that are otherwise native (like WPF). It is equally possible to choose between each option.

It was the .NET 6 team that originally built Blazor desktop for .NET apps, but there are no technical restrictions on using Blazor with other app stacks. Swift, for instance, might be used.

The Blazor desktop runs on top of the new Microsoft .NET Multi-platform App UI, which provides excellent performance and a native application container.

Blazor’s startup and throughput speeds are comparable to those of other desktop solutions in .NET 6. It’s an excellent choice for those who love web technologies.

Read in Detail about the differences between .Net Core and .Net Framework in our blog.

This feature would give the .NET framework a general feature similar to the Xamarin Hot Reload feature offered by Xamarin. The C# Intermediate Language would be supported, as well as XAML.

Crossgen2, which is a replacement for the older crossgen tool, is required for the features except the first. Crossgen development is made more efficient, and a number of capabilities are made possible with crossgen that are not available at this time.

One of the main benefits of containers is that .NET developers can create and customize their own configurations, as opposed to those of .tar.gz, .deb, or .msi deliverables.

A .NET 6 project’s development time is significantly reduced when using ComponentOne UI controls in WPF, Blazor, and Xamarin applications. This increases the robustness, responsiveness, and scalability of applications. All versions of .NET currently work well with these components, and .NET 6 will integrate perfectly.

TechnoBrains across multiple industry domains are provided by us as custom, robust, and top-notch solutions. We select .NET development architecture types carefully based on the needs of a specific application, whether it be multitier, microservices, or cloud-based. Our developers are up-to-date with the latest developments in .NET and make sure that we put in the best in delivering the project surpassing our esteemed clients expectations.