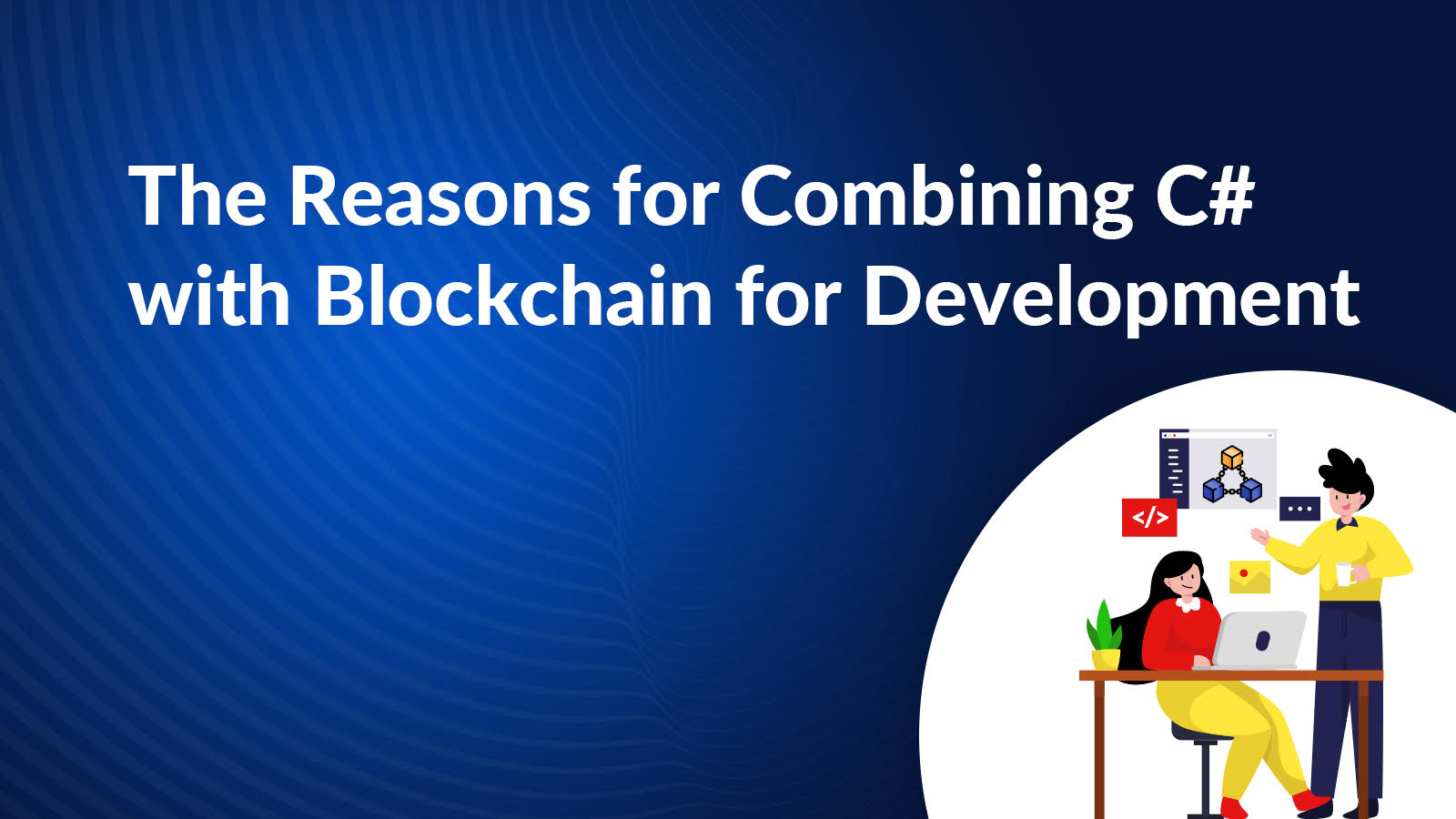 The Reasons for Combining C# with Blockchain for Development

Introduction Tech start-ups tend to use the latest technology available. To them, it is important that they use a language or framework which will operate on their blockchain platform as well as possible. In this case, C# programming language was the most adequate choice for those who were interested in making applications with .NET Framework […]

Blockchain
The Reasons for Combining C# with Blockchain for Development

Tech start-ups tend to use the latest technology available. To them, it is important that they use a language or framework which will operate on their blockchain platform as well as possible. In this case, C# programming language was the most adequate choice for those who were interested in making applications with .NET Framework and Windows Operating System.

In this article, we will talk about the reasons for using C# to write blockchain applications. This programming language is very well-known in any IT industry and has a great experience of development apps for Windows OS – all thanks to its perfect IDE by Microsoft (Visual Studio 2017), which allows writing solid code quickly.

If you wish to join the blockchain revolution, you should read this article thoroughly. So, let’s start!

Bitcoin is the most popular cryptocurrency in the world thanks to blockchain technology. Blockchain has also gained a lot of popularity because of Bitcoin. In addition to cryptocurrency applications, people are using blockchain in other kinds of applications as well. The Bitcoin whitepaper by Satoshi Nakamoto (the founder of blockchain) could lead you to get confused about how bitcoin works.

Blockchain technology is coming to our world, businesses and life very quickly, since it is secure, fast, and decentralized (not always, but most of the time).

A large number of blockchain projects are being developed or have been deployed to the Internet. Now, companies are brainstorming new blockchain ideas or improving what other companies have created, and this is just the beginning of how blockchain is changing the world.

To us, developers or people interested in starting their careers in blockchain is like a dream. One question remains, however. C# is a language used for creating desktop and mobile applications using Blockchain technology. Let’s read more about understanding blockchains and C# in order to develop your application:-

The following is a diagram showing the basic architecture of a blockchain.

In this blockchain, blocks are linked together to form a linked list. The properties of each block are listed below.

Genesis block is the first block. Genesis is the only block that does not contain data and has no previous blocks.

Read about the Search Engines Powered by BlockChains.

Blockchain can be described as a global Internet database that can be accessed by anyone with a computer. Blocks of data are arranged in a digital ledger, and these blocks are linked together through cryptographic validation. The hashing function makes the system virtually invulnerable.

Data is permanently stored in a blockchain system using a network of computers that are both able to house and decentralize data. Applications like email can be built on top of this massive electronic system. Furthermore, blockchain can be utilized to represent financial institutions’ loans, bonds, and to improve Internet of Things security and encryption.

Data owned by many organizations can be protected by blockchain by creating a verifiable record of all documents and contracts. This advantage applies to industries that use Big Data, such as healthcare and the public sector. Today’s developers realize the benefits of using blockchain technology to track and distribute security software updates.

Transparency and security are provided by blockchain technology. It can be viewed by software programmers as a bulletin board with easily traceable transactions. As they must be accompanied by a digital signature, they cannot be changed or deleted.

Additionally, as there are millions of users, it is very difficult to knock the network offline. Saving money is another benefit. As there is no middleman like a bank or a financial institution, companies and their customers are free to transact business without paying transaction fees. Records in this chain are accessible to anyone, including those in low-income neighborhoods, and cannot be altered by any one party.

Read about the Python Trends here.

What Is the C# Language?

In 2000, Microsoft’s Anders Hejlsberg created the C# programming language. Developers have also used the language to build XML web services and distributed components. The result of these advantages is the ability to create native mobile apps and websites quickly.

It is simple to use and straightforward because of several language constructs in C#. Encapsulated, type-safe event notifications are enabled by method signatures known as delegates. The use of embedded XML documentation comments and Language-Integrated Query (LINQ) makes developing software components simple. Property evaluation evaluates apps and returns the value of private member variables. Attributes provide development teams with key information regarding types at run time.

C# has already produced a seemingly limitless number of software products, including KeePass, a password manager, Open Dental, a practice management software for dentists, and Colectica, a statistical survey app. C# development of KeePass with robust cryptography, such as enhanced runtime security and offline functionality, has several advantages. Additionally, C# allows for easy integration of plugins and the organization of passwords into manageable groups. KeePass backend users have limitations related to using the language. Compiling code is one limitation.

In addition to Windows being required by any practice that wishes to run Open Dental, development in C# offers many benefits, including easy mobility and scalability. Colectica developers chose C# in order to facilitate the design and distribution of information quickly and easily using open data standards. In order to avoid recompiling and deploying the application again, changes to the software must be tested. According to most developers and their clients, however, the language has more advantages than disadvantages.

Combining C# with Blockchain for Development

C# is a simple and flexible object-oriented programming language developed by Microsoft nearly 20 years ago. Thanks to the .NET Framework and the open source community, C# is now one of the most popular programming languages used in many enterprise applications. Moreover, it can be used to build almost any kind of modern application including mobile ones.

As a result, blockchain start-ups can use C# and .NET Framework along with their own blockchain platform for the development of various applications on Windows OS. This solution is completely scalable when it comes to various apps or projects. Also, you will be able to find many developers who are familiar with C#.

Although C# is a very old programming language, it is still popular among developers because of its flexibility and easy learning curve. For example, the creator of Ethereum, Vitalik Buterin, was the one who worked on Windows OS using Visual Studio IDE for most of his projects. That’s how he got familiar with C#.

As you might know, the Ethereum blockchain is written with Turing-complete language Solidity which can be used to develop not only decentralized applications but also various high-level scripts with the help of special compiler. But without a doubt, C# outperforms Solidity in terms of scalability and compatibility with companies’ current infrastructure.

C# is also very helpful when it comes to connecting various blockchains with each other or making them interoperable. For example, the project AION (by Nuco Inc.) seeks to find a solution for this issue by combining C# with other programming languages like Java and JavaScript. If implemented successfully, AION will be able to build a new generation of blockchains, allowing them to exchange value over the network.

As you can see, C# is like a bridge between various blockchain platforms and applications which are written in different programming languages. In this case, it will be much easier to develop private or public decentralized applications using Ethereum protocol, for example.

C# can be used by developers to create blockchain applications. The Windows .NET framework allows C# to be used as an alternative to its cousin language, Java. The Windows .NET framework is frequently used in corporate environments, so it is a great tool for both large corporations and growth-oriented startups. The popular and dynamic languages C and C++ are brought together in C# as a modernized language. For programmers who are familiar with Java, C, and C++, C# is an easy language to learn and adapt to.

Read about Public and Private Blockchain in detail here.

The following are examples of blockchain projects written in C#:

Because of the syntax and types, most of the developers find it harder to learn than javascript, but it isn’t as complicated as say, Go.

In addition, this language is one of the easiest ones to learn thanks to a variety of good and free resources.

Working with a Team of C# and Blockchain Experts

Our C# and blockchain development service provides enterprises with a team of experts to help them create secure and sleek applications.

In conclusion, it can be said that C# programming language is very helpful when creating blockchain applications. It is enough to just use Visual Studio 2017 for the development of any decentralized apps with support of Windows OS. Of course, for large-scale projects involving many developers, it will be better to choose other programming languages like Go or Solidity.

But if you just want to prototype some ideas or create a simple decentralized application for your company, C# is the best choice.

Establish a leading business that focuses on the benefits of app development with C# and blockchain. Let us help you reduce the time and cost of delivering your technology to market while still meeting your customers’ needs.