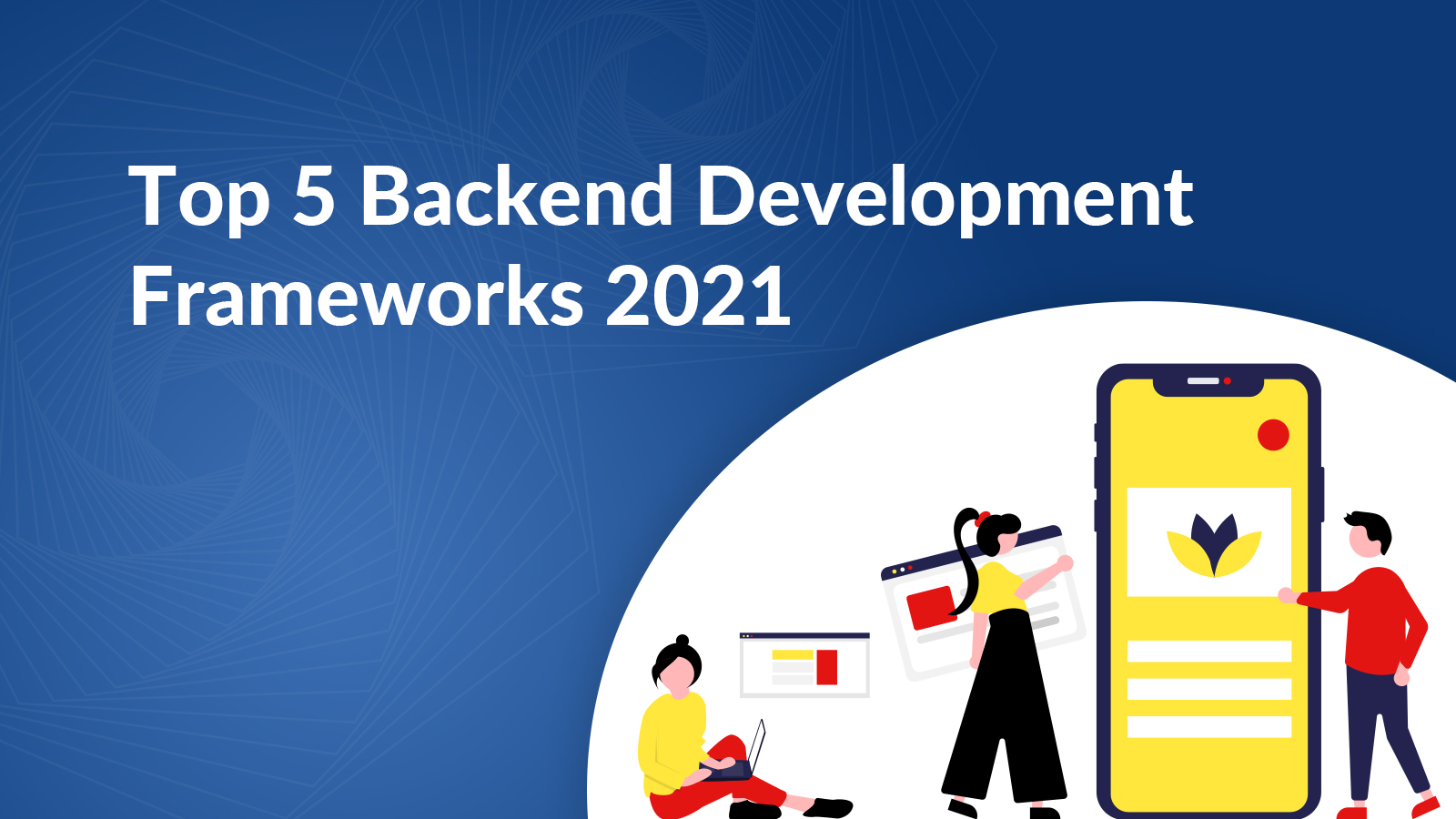 Developing the backend of a website primarily involves dealing with the server side. There are three main components to the backend:

A website’s backend is an integral part of its server-side operation. Moreover, the backend developer’s programs are responsible for communicating database information to the browser.

Why do you Need a Backend Development Framework for Software Development?

Websites and apps are the interfaces between users and clients. Clients request content from the server, which then serves it back to them. The backend allows your website to function and sends the data to the client. It also includes a database for storing application data.

Choosing the best framework for your project is essential to taking advantage of the power of frameworks in building rich and interactive web applications.

We’ll look at the 5 Most Powerful Backend Development Frameworks 2021.

In the world of programming, 60% of professionals use Kotlin, thus it occupies a prominent position. In addition to being code-concise, Kotlin is able to solve common developer problems, like null references. retain the Java’s benefits while a condensed version is also provided. Capture SSR development with Kotlin. On the Kotlin Roadmap, it will offer increased server-side development support, which is critical for today’s websites and user interaction.

According to StackOverflow, Kotlin ranked fourth in popularity in 2020 with 64,9% of the vote. Some of the world’s largest companies use Kotlin, including Google, Netflix, Amazon, Trello, and others. Aside from Pinterest and Uber, Kotlin has been adopted by companies such as Facebook and Uber.

Kotlin’s compatibility with Java will greatly influence future backend development. As a result, the developers can write code that is concise since they have access to massive libraries. With wide years of experience, more than 61 percent of developers prefer to work with Kotlin.

Spring.io is a framework that supports Kotlin.

JetBrains reports that Spring represents roughly half of all JVM-based projects using Kotlin. 16 percent of respondents in the StackOverflow survey say they use it. The popularity of the solution is based on its simplicity and effectiveness. These techniques define dependencies clearly and allow requirements to be easily resolved, such as dependency injection and inversion of control.

For some time, Python has been gaining in popularity in the IT industry as a high-level, dynamically typed programming language. CodinGame 2020 Developer Survey shows it is still the third most-known and most popular programming language in the modern developer community, 30 years after it was conceived and first implemented.

Python is a world-class programming language. In 2020, the Language of the Year award went to Python. Many of its features make it a popular choice.

Python has a more open programming model as compared to other backend programming languages. A flexible and multiple paradigm language, it is ideal for new startups.

Python is the most popular programming language

In terms of community popularity, Python ranks extremely high. This was its fourth time being named the TIOBE programming language of 2020, experiencing the largest increase in popularity (2.01 percent) in a single year. The TIOBE Index is a chart that displays the number of professional engineers and courses available worldwide for each programming language. Furthermore, 66.7 percent of respondents ranked Python as their favorite programming language in the Stack Overflow Developer Survey 2020.

It is important to take popularity into account when developing software. No matter if you have a knowledgeable team in-house or work with a reliable tech partner, starting your product development process much faster with a widely used technology is undoubtedly a necessity.

Many Django add-ons are available, such as content management, sitemaps, and RSS feeds. This package allows not only for the development of an MVP or proof of concept more quickly, but also for the customization and addition of components to tailor the product to the needs of its users.

If Django sounds too overwhelming, Flask is an alternative. The developer has more control over which components are used and how they are implemented, since this framework only provides a few basic tools and capabilities.

Know about the Python Trends 2022, here in our article.

The Golang programming language is also known as Go. TIOBE has already recognized this programming language twice since its release in 2009. Even though it is certainly less popular than Python, it was ranked fifth in the Stack Overflow survey as of 2020. As one of the backend development solutions for 2021, why did we select it?

The learning curve is progressive

For a novice programmer as well as an experienced developer, Go is easy to understand and use. The syntax of its specification is simple, so a young IT specialist shouldn’t have too much difficulty understanding it. You can also learn the language by taking the Go website’s interactive tour. As a result, programmer skilled in other programming languages, like C# or C++ is able to switch to Golang easily.

More and more programmers are switching to Go to increase their productivity because Google engineers designed it to make their software development processes simpler, more reliable, and more efficient. A whopping 81% of survey respondents felt extremely or very productive in Go, according to the Go Developer Survey 2020.

Gin Gonic is one of the best Go frameworks

A number of frameworks support Golang, including Martini, Revel, and Goji. We recommend Gin if you wish to develop Go backends in 2021. Gin is a minimalistic web framework with 45.2k GitHub stars.

Use it to build efficient REST APIs that are 40 times faster than Martini’s. Gin appears to be a viable option for developing microservices, which can put a significant amount of time into the launch of your product.

Read why Golang is best for AI Development, in our blog.

Developers can reap JavaScript development’s benefits on the back-end when switching from front-end to back-end development. The vibrant developer community of Node.js makes it one of the best backend programming languages. Developers contribute to Node.js’ growth.

Microservices are ideal for Node.js since it is a lightweight technology. It enables application logic to be divided into smaller modules, resulting in greater flexibility. Since Node.js can be extended with new functions, it has become one of the most popular backend programming languages. The code can be reused by the developers, which improves the performance and productivity of the website.

As Node.js allows for the creation of separate components that can easily be incorporated into a larger application, it allows you to save money during the initial development stage, therefore reducing the time it takes to market your products. Node.js alone offers this feature, making it an ideal choice for building MVPs and scalable, high-traffic applications.

Among many of the other technologies that developers use, Node.js takes the top spot for the second year in a row, with half of the respondents using it.

Express: The popular framework for Node.js

When developing backends using JavaScript, you may wonder which framework is best to use. With 76.1k stars on GitHub, Express is currently the most popular Node.js framework for the new decade.

Express.js, according to its website, is a simplistic, unbiased, and quick framework. It provides backend developers with a thin layer of powerful features for mobile and web apps: not too much, just enough to make the backend development process easier.

2021 will be a pivotal year for Ruby on Rails because it will reduce time spent on standardized tasks. Comparatively to other languages, it reduces the time it takes to develop a website by 25%. On top of it, Ruby on Rails offers a variety of advantages that will benefit businesses for years to come.

PHP is a backend programming language that has excellent features and flexibility. Because of this, PHP is predicted to become the language of choice for backend development by 2021. PHP’s syntax is also extremely expressive, so developers can express themselves creatively.

This allows for rapid website development by simplifying the structure. Developers don’t have to write lengthy and complex code to add features to the app.

Access a variety of relational databases using this backend programming language. Aside from automating common web development tasks such as session management, URL mapping, caching, and so on, PHP also offers many other features.

Laravel: Best PHP framework to use

Featuring an expressive, elegant syntax, Laravel is a framework for developing web applications. Development must be enjoyable and creative if it is to be truly fulfilling. Authentication, routing, sessions, and caching are among the common tasks simplified by Laravel.

Know which is better Laravel vs Codelgniter, in our blog here.

Find out which Backend Development Frameworks will be most beneficial to your business project in 2021, and how to implement them to create a trending product.

With hands-on experience with popular front-end and back-end frameworks, we offer end-to-end software design and development services. Our back-end and front-end engineers also help in improving security, reliability, and features to make sure your business application scales and remains secure.