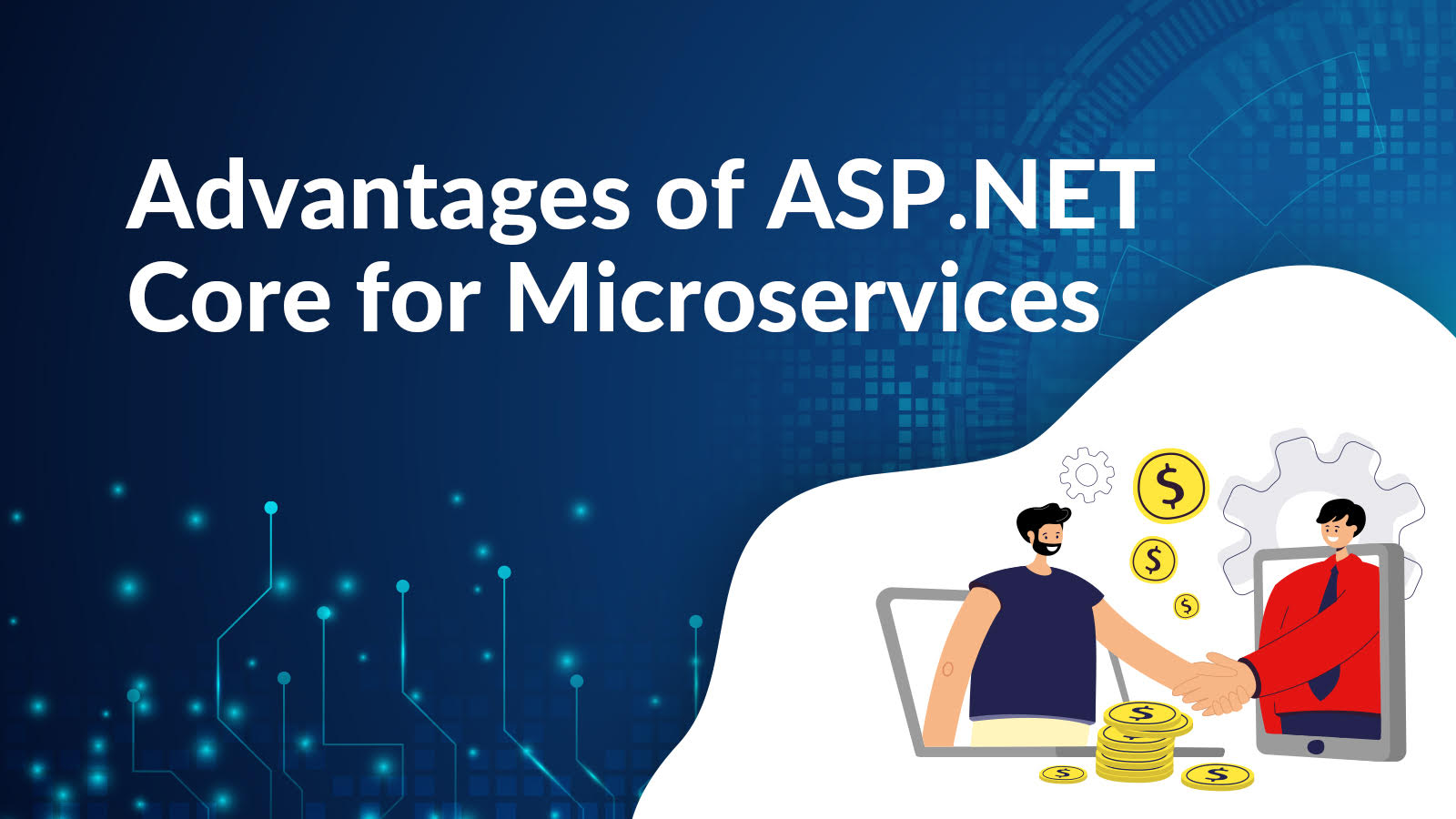 A Deep Dive into the Advantages of ASP.NET Core when it comes to Building Microservices!

Web Development
A Deep Dive into the Advantages of ASP.NET Core when it comes to Building Microservices!

In this post, I’m going to explain why ASP.NET Core is a great framework for building applications in a microservices architecture. Since each development team should be free to use the technologically desirable language or platform, we will also discuss why microservice architectures are superior.

Many businesses have benefited from microservices, including Amazon, Netflix, PayPal, Twitter, and eBay, in addition to many others. Building microservices applications (microservices web applications or microservices-based applications) is the implementation of a full-size application built from several components. Each component has a specific purpose, works independently, and interacts with each other via defined APIs.

Why Microservices Has Become Popular?

Legacy applications have many drawbacks for businesses, such as complicated modifications, no scalability, slow modifications, suppression of innovation, and interdependencies. On the other hand, microservice-based applications have no such limitations. The performance of a microservice or a component of the application is not affected by any changes in the functioning of other components. There is no need to spend time and effort on its repair. Due to its high resilience, improved scalability, deployment of innovations, long-term commitments, and high flexibility, it offers benefits for many business applications.

Read about which one to select from .NET Core and .NET Framework.

ASP.NET Core is the best framework for building microservices applications because it offers incredible benefits including cloud-based configurations, rapid development, and cross-platform support. These benefits are valuable for any business looking to grow and needing scalability, flexibility, and quick application development.

Compared to other frameworks or programming languages, ASP.NET Core makes microservices development remarkably easy, and it complements each other with almost similar methodologies in architectures.

The microservices draw their strength from the fact that they do not need to be tied to a specific platform or language. ASP.NET Core can now run on any platform: Mac, Linux, or Windows, unlike the classic version.

A Docker container can contain your ASP.NET Core application. While this feature was already available in the classic version, the new version renders a much better image much more quickly.

A quick glance at the performance of ASP.NET Core since it was released shows that it is on the rise.

The latest version ASP.NET Core 2.1 is much more stable than version 1.0. .NET Core looked like a beta product with great potential at the beginning of 2017, when version 1.0 was launched. Many features hadn’t yet been completed and the database connection support was poor. Framework improvements since then include NHibernate now supporting ASP.NET Core, module performance improvements and a much more stable platform overall. You can read here each release note.

The power of ASP.NET Core lies in the fact that developers are able to choose whichever IDE is most comfortable for them. It is not necessary to use Microsoft Visual Studio. VS Code is a free IDE that developers use to create microservice applications.

You can create a microservice scaffold by running “dotnet new webapi” on your computer.

With ASP.NET Core, you can easily scale your microservices and use all the features of K8s.

Microservices refers to a way of building software that grew from current trends to become a way of developing and managing software solutions at scale more quickly and efficiently. They are based on principles and architecture patterns. The microservices exist independently, but they are also interdependent. All microservices in a project are deployed in production independently in both the cloud and on-premise, alongside one another. This tutorial shows how to build, deploy, and test a microservice based on ASP.NET and the Docker container.

What is Microservices Architecture?

Microsoft Docs is a perfect example of microservice architecture.

Management. Serves as the service’s nodes.

Identity Provider. An identity management system and authentication services are provided via a distributed network.

Service Discovery. Tracks the addresses and endpoints of services.

API Gateway. Provides access to clients. An underlying microservice that returns a single response from the client, which in turn can aggregate responses from multiple microservices.

A microservice is deployed independently with a separate database per service, so a microservice looks like the following screenshot.

Monolithic applications are more like a complete package with all the relevant components and services wrapped up within one.

As the diagram shows, monolithic architectures can either be completely packaged or service-based.

The definition of a microservice is a small, self-contained application communicating with itself using messaging. These services are independent because they have access to their own databases.

Despite a service-oriented architecture, monolithic architecture relies on a single database for all functions, whereas microservice architecture uses separate databases for each service.

SO WHICH SOFTWARE ARCHITECTURE SUITS YOUR SOLUTION AND YOUR BUSINESS BEST?

An architecture of microservices is characterized by the independence of its services, each having its own communication protocol. Each service in a SOA needs to share the same communication mechanism (ESB). ESB cordinates and manages the services in the SOA. The ESB can, however, be a failure point for the entire enterprise, and when one service slows down, it can affect the whole system.

The particular design of each of the services in microservices architectures is to do one thing exceptionally well. As an alternative, SOAs can comprise small, specialized services as well as enterprise-wide services.

SOAs simplify the development and troubleshooting process by leveraging the advantages of sharing an architecture. Ultimately, this also slows down SOAs, whose design is to maximize duplication and minimize sharing.

Due to its nature, SOA enables the implementation of common data governance standards across all services by utilizing shared resources. The microservices lack consistency in data governance because of their independent nature. It can support greater collaboration among services as a result of providing increased flexibility.

In addition, SOAs and microservices allocate storage resources differently. In SOA architecture, use single data store in order to store data for all services within a given application, while in microservice architecture, data storage is provided for services as they need it.

SOA architecture provides more flexibility and agility for some organizations, replacing the monolith. However, SOA services do not address the needs of individual companies who wish to build and utilize business processes specifically for their needs. As part of its microservices architecture, use DevOps to enhance an organization’s ability to migrate from SOA architecture.

Service oriented Architecture vs. Microservices: Which is best for you?

What are the benefits of different architectural styles? And how can you pick the one that will work best in your situation? In general, it depends on the size and diversity of your application environment.

Automating business processes is possible with both SOAs and microservices. It tends to be service-oriented architectures (SOA) in larger, more diverse environments, which integrate heterogeneous applications and messaging protocols using an enterprise service bus (ESB). Web and mobile applications do not require such a robust communication layer and are easily developed using microservices technology.

Among the resources that containers slice are the network stack, process namespace, file system hierarchy, and storage stack, among others. As it is virtualizing the operating system, Dockers are more like that.

Why ASP.NET core for Microservices?

As the platform – dot NET – is integrated into the service, ASP.NET Core development services are considered superior to the others. It has been reported that many developers have migrated from ASP.NET to .NET Core because of its compatibility with Docker Container, Windows, Linux, and macOS, cloud-based configuration, fast performance, and other factors which have caused many to migrate from it. Many bug enterprises use ASP.NET Core. Henceforth, the examples are Alibaba Travels to build scalable, flexible, and high-performing web applications.

Read about which developers to hire from FrontEnd, Backend and FullStack Developers from here.

This framework facilitates the development of microservices as part of a container-based architecture.

With .NET Core, developers can create apps for any platform, whether it be Windows or macOS. It supports Linux as well as all other technologies. In addition to supporting Docker Containers, microservices built with Docker are advantageous for developers as containers and microservices work well together.

Microsoft Visual Studio is not the only IDE ASP.NET Core developers can use for development of microservices .NET Core applications. As a result, with the help of free software develop the microservices-based applications and they do not have any conditions.

Use Kubernetes and Docker technologies with .NET Core to develop ASP Core microservices. As a result, we can say that developers always prefer Docker for microservices as it allows for easy access to details and information about the entire system in microservices.

Kubernetes’ advanced properties enhance the microservices development. As a result, the features act as an add-on technology to Core development.

Use of a high-definition image as an add-on feature in the latest ASP.NET Core versions along with the ability to develop quickly. Therefore, a majority of ASP.NET Core applications support the Docker container technology. As a result, easily developers can build microservices web apps. Thus, consider the ASP.NET Core’s above key qualities when developing microservices and decide how you want to proceed.

Advantage of having Microservice-based application

This blog extensively discusses how .NET Core is ideal for microservices building due to its supportive features. As a result, any business can hire ASP.NET development companies for expert guidance and appropriate implementation of ASP.NET Core.

With a 97% success rate in ASP.NET development, TechnoBrains, a full-stack development company, is grateful to have found success in a variety of ASP.NET projects. Therefore, If you need .Net Core Developer Hire, we would be glad to assist you.

A monolithic or microservices-based application architecture must be transparent in order to have confidence in it. Detect and resolve performance issues before they affect business results by leveraging TechnoBrains code-level metrics, global transactional tracing, and automated alerting that allows you to create a center of monitoring excellence. Hence, contact us now!