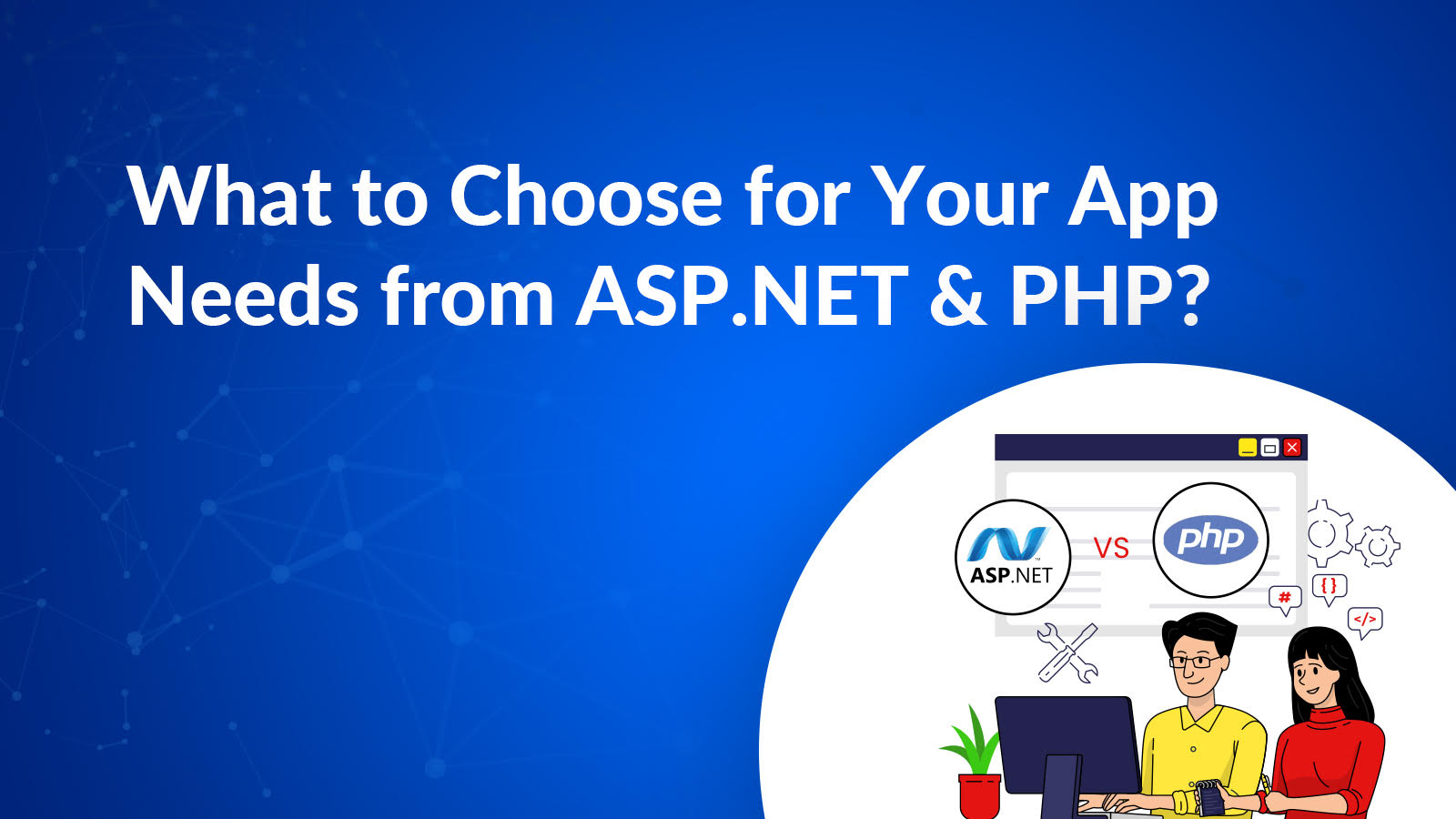 ASP.NET vs PHP: What to Choose for Your App Needs?

For the next web development project, selecting the right technology stack can be quite challenging. Even though some frameworks or programming languages fit perfectly with other projects, the final choice must definitely match the ongoing requirements. Companies must conduct their own research due to the variety of technologies available. Our current market trends for web […]

Web Development
ASP.NET vs PHP: What to Choose for Your App Needs?

For the next web development project, selecting the right technology stack can be quite challenging. Even though some frameworks or programming languages fit perfectly with other projects, the final choice must definitely match the ongoing requirements. Companies must conduct their own research due to the variety of technologies available. Our current market trends for web development will be discussed in light of ASP.NET vs PHP comparison in this article.

Both PHP and ASP.NET have a broad base of users. It is difficult for new developers to choose between them because they are used by so many developers. ASP.NET has a brand name like Microsoft attached to it and PHP is a general scripting language on which developers heavily rely.

There doesn’t seem to be any end to the ASP.NET vs PHP debate anytime soon. They are both popular programming languages. You’ve probably seen quite a number of articles comparing ASP.NET and PHP, but many of them are biased.

The purpose of this article is to talk about both the ASP.NET and PHP programming languages, explain their differences, and determine which is better.

Read about the Front End Development Trends 2021, here in the article.

Web development is done through this open source program, which can be embedded into HTML. PHP framework offers simple and easy coding techniques, which is why it is great for beginners. Despite PHP’s advanced features, it is also great for professional programmers.

Pros and Cons of PHP framework

PHP’s rapid development is one of its biggest advantages. A mobile app company that does multiple projects in one day can benefit from PHP for a faster development process and faster app release.

In addition to being fast, the framework is also secure. The PHP developers must use the framework correctly to guarantee the security of the application. The PHP community provides help whenever needed, and it is easier to maintain than Java.

For all its advantages, PHP is preferred by developers, but they are not blind to its disadvantages. The cons of this framework include slower execution, difficulties solving specific problems, and the long learning curve.

The ASP.NET server side web development tool is an open-source tool developed by Microsoft. Frameworks provide tools for creating dynamic websites, web applications, and web solutions. The ASP.NET framework uses the .NET language and supports Visual Basic.NET, JavaScript.NET, and languages such as Perl and Python. Additionally, it offers the capabilities of previous versions such as ASP.NET MVC.

Pros and Cons of ASP.NET frameworks

One of the benefits of using ASP.NET is the ease of adding and removing features as needed, the open source and cross-platform nature of the framework, as well as its compatibility with other .NET frameworks. Like Ruby and Node.js, Microsoft says it will become a highly popular framework soon.

However, there are a few cons to ASP.NET that may slow the process of its popularity. Since it is too raw, it doesn’t have basic features and the framework has problems with ease of changing, documentation gaps, and lack of supporting tools. ASP.NET developers can solve these issues by utilizing external tools and methods.

ASP.NET vs PHP: The comparison

In terms of frameworks, PHP and ASP.NET both offer excellent capabilities, but each has distinct advantages. A developer’s experience with each framework has already settled this debate. Developers deciding which platform to use might find this comparison helpful.

ASP.NET and PHP both have advantages and disadvantages. Let’s compare each of these two closely to determine which one is superior.

We will discuss ASP.NET vs PHP in this section. Which one is best?

Performance of ASP.NET is better than that of PHP. PHP developers might not believe this statement since many great websites are built with PHP.

Even though that is true, it does not negate the fact that ASP.NET allows parallel programming, which allows multiple code modules to run concurrently, while PHP does not support threading at all.

Use and market share are two of the biggest differences between PHP and ASP.NET. This chart clearly shows that PHP has a larger market share than ASP.NET. PHP websites have been ranked among the top 10k, 100k, and 1M sites on the web. In contrast, ASP.NET has not been awarded any titles that can compete with PHP’s.

Learn about the difference between .NET Core and .NET Framework here

The security options both PHP and ASP.NET offer are also very different. While both platforms provide developers with security features, ASP.NET incorporates security features like SQL injection. With ASP.NET, the work is done automatically, whereas PHP only provides the tools.

ASP.NET would therefore be the better choice when deciding which is better security-wise, ASP.NET or PHP. The tool is provided to PHP developers, who can structure their apps securely if they wish. However, many PHP developers do not pay attention to this, which leaves their applications vulnerable.

Since it was mentioned earlier in the article that PHP websites ranked higher than ASP.NET built websites, here are a couple of lists comparing ASP.NET and PHP websites:

In both lists, some websites are extremely popular, but PHP is the more useful as a programming language.

Read here the reasons why PHP is the most popular language.

Cost-wise which is better, ASP.NET or PHP?

Due to PHP’s open source development framework, it is clearly the clear winner over ASP.NET, which charges for hosting. Microsoft-owned ASP.NET charges a fee, but PHP is freely available, so comparisons between PHP and ASP.NET may make developers skeptical about ASP.NET.

While the cost is a deterrent to some developers, others continue to use the framework to build websites. Outsourcing the development of ASP.NET mobile apps is another great option.

Because PHP is free, there are more people using it than ASP DOT NET. Nevertheless, a good community has more to offer than that. Even though the number of developers using ASP.NET is not as high as PHP, they are still very supportive of their communities.

As a result, ASP.NET is an advantage over PHP because ASP.NET developers have a dedicated community that has a large support structure.

Learn about the Why ASP.Net is best for Microservices.

As you can see from all the comparisons in the previous section, PHP is the clear winner over ASP.NET. For those who are looking for reasons for choosing PHP over ASP.NET, this may seem unfair. But why would anyone want to use ASP.NET?

It is now time to decide which method is better, ASP.NET or PHP, as the debate has come to a close. Developers can freely choose between the two development frameworks depending on the needs of the process.

The PHP framework has proven to be a strong one in many cases, but it has also had a number of weaknesses that can significantly affect the development process. In addition, ASP.NET development was highlighted in a separate section with a strong list of benefits for developers.

PHP is a free framework with a large community and is widely used. ASP.NET, however, is more likely to have more future potential since it is backed by Microsoft, a huge company.

We can help you decide between the two if you still can’t decide. Contact TechnoBrains today for more information. We provide both ASP.NET and PHP web app development services to help you find the best solution to your problem.

Our company has extensive web experience that we are willing to share and find the most reasonable solution for your case as a software development outsourcing company. You can contact us by filling in the contact form or by using the chat widget on the right.