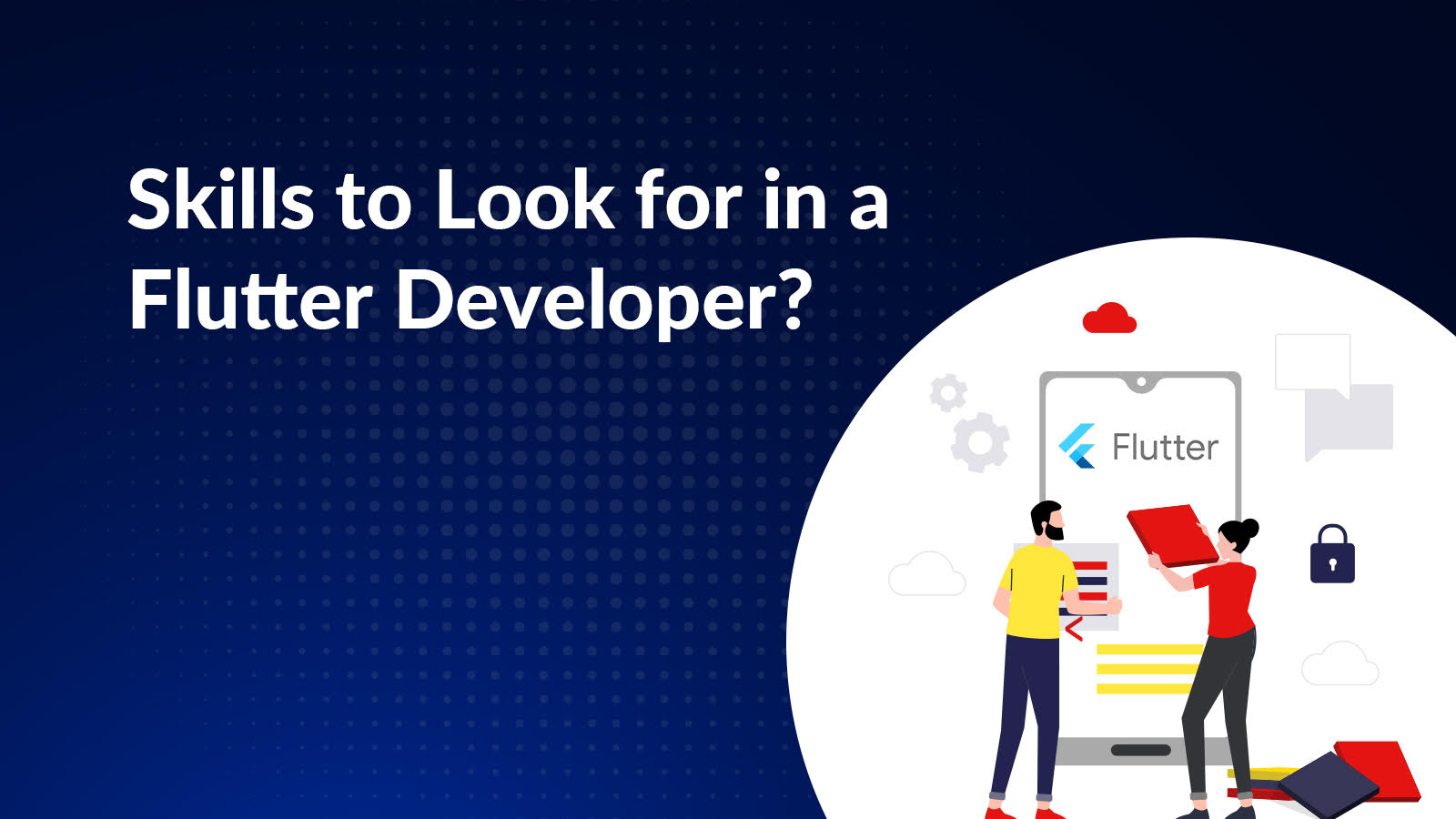 Top Skills To Look For In A Flutter Developer?

As the Flutter app development market rises by the day, it is not an exaggeration to say it is on a roll. Yes, the Flutter framework is developing rapidly and offers exceptional opportunities for cross-platform app development. All know the need for cross-platform apps. Cost-effectively expanding their user base is possible through it. Flutter is […]

Mobile App
Top Skills To Look For In A Flutter Developer?

Having said that, what are the best ways to hire the proficient Flutter developer for your development process? It is important to understand how to identify a top flutter app development company to answer this question.

Why is Flutter becoming the ‘eye candy’ of the business organizations?

In a nutshell, the Flutter framework is easy to use and extremely accessible. Flutter is also the third most popular application development framework according to a survey conducted by Stackoverflow in 2020. Flutter is the preferred platform for developing cross-platform apps by 69% of respondents in the survey.

In addition, the developers of Flutter are not limited by a particular platform or system.

A single codebase is used for the flutter development framework. Thus, it reduces the total development lifecycle of the app, elevating the overall development process. The developers get an early-bird advantage at the app store since they are able to develop the app within a short period of time.

Flutter also offers a wide variety of tools, which is one of the reasons developers love it. Developers are thus able to develop cross-platform applications through Flutter using an array of options.

Flutter usage has increased significantly among developers according to a different study conducted by statistics.

Flutter’s app framework works with web and desktop development. Its popularity among developers is due to this fact.

Now that we know why Flutter is popular, let’s discuss the nuances of hiring a developer for it.

Know the difference between .NET Core and .NET Framework. Read here in our detail.

How can Flutter Help Startups

Do you know how many apps are available on Apple’s App Store and Google Play Store? There are 2.56 million apps in the Play store, while there are 1.85 million in Apple’s app store. According to these figures, a wide range of business types are in need of mobile applications.

To survive cutthroat competition, startups must step up their efforts. Don’t just develop an app for a mobile application. Creating mobile applications is quick, affordable, and aesthetically pleasing with Flutter.

What Are The Key Responsibilities of a Flutter developer?

A great power comes with a great responsibility, said Spiderman. As well as Flutter developers, this phrase applies perfectly. Flutter has enormous potential for building apps. Therefore, developers need to understand their responsibilities in order to capitalize on the potential.

Read why you should use Flutter for your next App Development, in our blog.

When hiring Flutter developer, you should also consider the responsibilities of the developers:

Clean code is an essential part of any software project. Code must be easy to understand and readable by the Flutter developers. Further, clean code contributes to a faster application development process.

As a result, the team can scale the app faster since establishing a working methodology is easier. It helps developers to take references while developing different apps as well when writing clean code.

In addition, Flutter developers need to integrate all the required features. As well as foreseeing possible bugs, they should also anticipate them.

Developers who anticipate bugs will have no difficulty fixing them as well if they have a keen eye for it. A very important step after each phase of development is testing the product. The quality assurance team will detect possible bugs and malfunctions through various detection processes.

Involvement in the development cycle

Teamwork is essential to the development of mobile apps. Also, includes UI/UX designers, project managers, quality assurance specialists, etc. in the group. The Flutter developers will be responsible for making sure the team works together well in order to achieve the best results. Thus, you should examine a Flutter developer’s ability to work in a team before hiring him or her.

The developers are then responsible for adjusting their work ethics and not letting the development process suffer.

Also, the Flutter developers will integrate new tools into the app’s architecture to enhance its functionality.

Be up to date

In the modern app development world, staying up-to-date with new and changing trends has become a necessity. Developers of Flutter must therefore constantly learn. Since 2017, three main updates have been made since the cross-platform application framework.

During the app development process, they will also be able to deliver the best possible results.

Software developers can use these tools to keep track of the changes they make to their projects. As a result, software developers are able to collaborate more effectively. This contributes to increased productivity.

Download and install to the IDE or Code Editor you are using. In order to access its features, you’ll need a Github account. Creating a Github repository can be as simple as writing git commands. You can improve your code if you make your repository public (if it’s open). As well as making your repository public, you can make it private.

With Flutter develop mobile, web, and desktop applications using a single code base that is fast and powerful. Flutter Framework is primarily written in Dart.

Some features of Flutter that make it popular include:

As a result, develop Flutter applications more easily. As well as looking and feeling like native apps, they also improve the performance.

Contains layout inspection, performance, and memory tools for Flutter and Dart developers. This framework includes all the tools that a Flutter developer needs for effective debugging.

Check out what makes Flutter so impressive compared to other frameworks like React Native.

Read in detail the Advantages of ASP.NET Core when it comes to Building Microservices!

To visualize and craft ideas, these tools are used. App development involves a lot of design. Software development is made easier with this tool. Working on personal projects also requires the use of design tools.

The following tools are popular among designers:

These are 5 Skills A Proficient Flutter Developer Should Have in 2021:

Prior Knowledge of Native Programming Languages

Having experience coding in languages like Java, C, C#, C++, Lua, or Kotlin is very important before we begin coding in Flutter. For a cross-platform app that can be used on iOS and Android, good Swift knowledge and previous experience are required. You will be able to understand Flutter better if you are familiar with these programming languages. Flutter is a very popular choice used by IT companies since it’s easier to learn and apply than Android or iOS.

Good Knowledge or Experience in Dart

In Flutter, simple scripts are written in Dart, a client-side programming language. Also, Google introduced Dart, a language based on objects. The skills of professionals compare it to Java or C. Nevertheless, Flutter is a multidimensional programming language that can be used for web, games, servers, desktops, and mobile, as it is a multidimensional programming language. It is highly probable that an interview task will be based on Dart if you are working with Flutter because the majority of companies hiring Flutter developers will require some knowledge or experience in Dart.

Knowledge of Agile and Waterfall methodologies for software development

Developers should be familiar with and surf multiple work methodologies. It is mostly used in Agile and Waterfall methods in Dart+Flutter.

Multi-framework applications rely on SQLite for persistent data storage and loading. Nevertheless, SQLite has other advantages in Flutter – with the sqflite plugin, SQLite data can be easily inserted, read, updated and deleted, while multiple operations can be performed.

In addition to the support Flutter developers provide, and the extensive documentation available on how they work together, SQLite knowledge and practice are crucial in Flutter. As long as Flutter developers work with large amounts of data sooner or later, knowing SQLite will be a helpful tool.

Know the difference between .Net Framework vs .NET Core vs .Net 5, in our detailed blog.

No matter the framework or language used, Git has become an essential part of the developer’s life for a while now. For developers, Git is a valuable tool, and Flutter serves the same purpose. Git becomes an indispensable part of the work process for developers after they become familiar with it from early stages.

Flutter developers must possess a range of skills, including technical and non-technical skills. A company already expects developers to have abilities such as good communication skills, adaptability, precision, and responsibility even if you are a junior developer.

Developers should focus on working with other frameworks and programming languages such as Flutter and Dart. Getting a job as a Flutter developer requires experience with other development frameworks, so you might have a preferred framework.

Additionally, I’d like to provide a few Flutter-specific widgets that have been invaluable to me as I’ve learnt to be competent with Flutter.

Widgets are aplenty, but focusing on the basics is key. As a beginner, I recommend learning the following skills with accompanying widgets:

Before implementing more widgets than this, I always recommend people write dead simple apps using the basic skills they already have before adding more and more. It’s okay to show them to your family and friends without submitting them. Learning by doing is the best way to learn!

Are you thinking why Should You Migrate to .Net5 Considering its Benefits, then read our detailed blog.

Many developers prefer Agile over other software development practices. In case requirements change in the future, your developers may not be able to adapt to the changes quickly.

Why Readable Code Matters for Flutter?

Code does not exist in a vacuum — even if it works right now, things might change in the future. A code that is tangled like spaghetti and whose functions nobody knows makes it impossible to update or maintain. To develop well-documented, readable code, developers need to be proficient.

Why Flutter Developer Need to Optimize Their Code?

Applications for Flutter typically run on iOS and Android devices, so they must balance performance with low-power mobile CPUs and short battery life. Both Google and Apple strive for fluid, smooth, and animated UIs. Consequently, code optimization becomes a crucial skill as a result of this delicate balancing act.

Conclusion – Why You Should Hire Flutter Developer from TechnoBrains

TechnoBrains’ Flutter developers are an excellent choice. They are perfect for those who wish to expand their knowledge of Flutter or develop applications for their web services. In addition, they do not suffer from the limitations associated with non-local teams, like a language barrier or limited motivation.